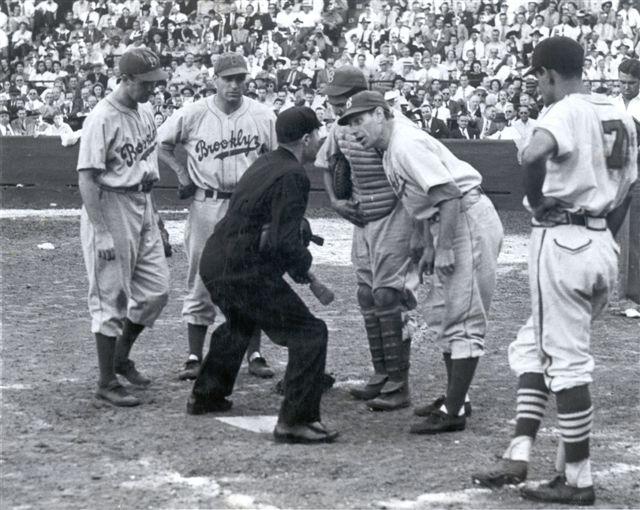 Good afternoon, Dodger fans.  Time for another roundup of what’s going on in the Dodger world today.  We’ve chosen a picture of Leo “The Lip” Durocher arguing with an umpire for our feature image today, just for a bit of nostalgia.

It’s Saturday, March 24th, and today is the last day of spring ball at Camelback Ranch.  Most of the organization has packed their bags, and the team will soon be heading to Los Angeles to start the annual 3 game pre-season series against the Angels starting tomorrow and running through Tuesday.

Here are some of the Dodgers-related stories across the web today.

We’ll start with a piece by Stacie Wheeler of Dodgers Digest.  Wheeler has spent part of her spring in Arizona and caught up with potential Dodger bullpen piece J.T. Chargois.  As we’ve come to know, the Dodgers enter each spring with a bullpen that seems to be based around Kenley Jansen, a few young arms, and whoever else is available to show up to camp.  Last year, that plan worked out well and a camp invite, Brandon Morrow, wound up rejuvinating his career by establishing himself as one of the best relievers in baseball and ultimately pitching in all 7 games of the World Series.  Wheeler believes that Chargois, a right-handed reliever acquired from the Twins via the waiver wire on February 23rd, could be one of the pieces that holds together the bullpen this year.

Wheeler interviewed Chargois personally about his injury history and his process in getting back into the swing of things with the Dodgers.  According to David Hood of True Blue L.A., he became that site’s number 29-ranked prospect in the organization and top relief-only prospect upon joining the team.  He’s posted great numbers this spring (Wheeler’s article lists his lines as a 1.13 ERA and a 0.63 WHIP with 10 strikeouts and three walks in eight innings pitched) and has taken advantage of working with Dodger pitchers, including Clayton Kershaw to treat this spring like a sort of classroom setting.  While Chargois’ numbers with Minnesota last year left something to be desired (4.70 ERA, 1.609 WIP, 17/12 K/BB ratio in 23 innings of work,) the one-time top prospect’s fastball tops out at 100 miles an hour and his hot spring means that he just might find himself a spot in the Dodger bullpen this year.

Michael Wittman over at Dodgers Way believes that Enrique Hernandez is primed for a breakout season.  Wittman points out that Hernandez, usually a lefty masher who struggles against righties (.270 against lefties, .203 against righties in his career,) has hit .353 against righties this spring while maintaining his usual clip against lefties at .273.  Wittman points out that the injury to Justin Turner will likely give Hernandez the bulk of the playing time at second base over the course of the first month of the season, and that the questionable elbow health of Corey Seager may also provide opportunities for both Hernandez and Chris Taylor to get some starts at shortstop as the team works to manage Seager’s playing time and minimize his injury risk.  Of course, given that Hernandez seems to do everything but pitch (and we can’t really count out the idea that he might do just that in a blowout game,) odds are that he will see both at bats and time in the field often over the course of the season, even if key players remain healthy.

Eric Stephen of True Blue L.A. seeks to provide clarity on the bullpen situation, and he writes that the team plans to open the season with 8 relievers.  Stephen believes that seven of the spots are likely set, barring injury, and that it’s likely the 8th and final spot is a competition between Yimi Garcia and Wilmer Font.  If it’s decided that all other things are equal, Font is out of options.  If the Dodgers decide they want to take a longer look at him, or have him on board in case an early season emergency start or long relief appearance is necessary, then it would necessitate him being chosen over Garcia for the final spot.  Of course, given what we know about the roster management approaches of Andrew Friedman and Farhan Zaidi, a mix of use of options and the 10 day disabled list for minor injuries and ailments will allow the team to creatively mix and match their bullpen needs over the course of the season.

Howard Cole at Forbes looks at the Dodgers’ opening day roster possibilities and has some opinions on what should be as opposed to what will be.  Cole has both Font and Chargois in his projected bullpen and believes that the optioning of ambedextrious reliever Pat Venditte is indicitive of the club’s planned direction with that particular player.  Cole also believes that Andrew Toles will beat out Joc Pederson for an outfield spot and that he should based on the spring performance of both players.  He projects that Kyle Farmer, due to his versatility on the field, will be carried as a third catcher on the roster and will also see time at other positions.  Cole believes the last man out is 27 year old outfielder Trayce Thompson, who finds himself out of options and therefore likely out of time on the Dodgers’ 40 man roster.  Cole is hopeful that either Thompson can be flipped to get another piece, or that he will clear waivers and be outrighted to AAA Oklahoma City to continue to provide organizational depth and, possibly, get another shot with the big club down the line if he can show improved play.

And of course, it’s never too early for a Prospect Watch.  Andy McCullough at the Los Angeles Times ranks the Top 5 Dodger prospects heading into the 2018 season.  The Top 2 come as no surprise, with pitcher Walker Buehler ranking number one and outfielder Alex Verdugo at number two.  After that, McCullough goes with catching prospect Keibert Ruiz at number three, pointing out that the 19 year old Ruiz is projected to have a higher potential ceiling than current top catching prospects Kyle Farmer and Will Smith while praising the positional depth within the organization at catcher.  Number four goes to starting pitching prospect Mitchell White, who posted a 2.57 ERA and a 10 K per 9 IP rate last season and features a mid-90’s fastball complimented by a slider and a curveball.  The fifth-rated propsect in the system, per McCullough, is outfielder D.J. Peters.  While not as highly touted in the press as Verdugo, Peters has come on impressively and was 7-for-19 in limited time at the big league camp this spring before being sent back to minor league camp.

Lastly today, we bring you this tidbit from Joe Fox of the Los Angeles Times, who shares how to find shade at Dodger Stadium.  We all know that the heat can get pretty punishing as the season wears on, and Fox shares his tips and tricks for finding the best spots to keep cool during games.