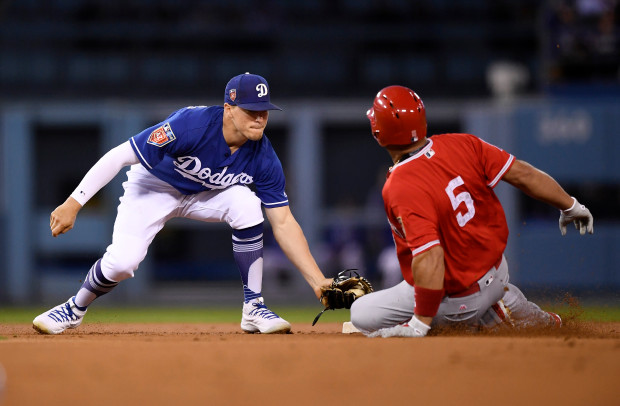 Good morning Dodger fans. Our beloved boys in blue are coming off a tough 4-1 loss against the Angels in Game 2 of the Freeway Series. Andrew Toles hit a 9th inning home run to keep the team from getting shut out.

The rubber match of the annual exhibition showdown is at Dodger Stadium tonight at 7:10 p.m.

Here’s today’s look around the web at Dodger news and views.

Here’s a fan view from the L.A. Sports Hub at Fansided.  Jason Reed reflects on the 2017 playoffs and the victories over the Arizona Diamondbacks and the Chicago Cubs before getting into how even the World Series was, and how the end result is likely to stick on Dodger fans’ minds throughout this season.  Reed believes that Dodger fans will try to draw comparisons between this year’s team relative to last year, and the 2014-2015 Kansas City Royals, who lost in 2014 to the Giants before recovering to win it all in 2015 over the Mets.

Daniel Starkland of Dodger Blue reports that Trayce Thompson is hopeful that he will remain on the roster and secure a place on the team for opening day.  Thompson is out of options and the speculation all spring is that Thompson would be cut.  However, after a decent spring and an underwhelming performance by Joc Pederson (who does have minor league options) combined with a desire to get Andrew Toles consistent playing time by starting him at AAA Oklahoma City, it appears possible that Thompson might sneak his way onto the roster after all.  We should know more in the next 48 hours.

Clint Evans at Dodgers Nation writes about the case for Enrique “Kike” Hernandez to play every day.  Hernandez, who has filled in as a “super utility player” over the past few years and who has made a name for himself as a “lefty masher,” has historically put up better “reverse splits” in the minor leagues, but has been primarily used against lefties in the majors.  Hernandez believes he has a case to play every day and that he can be effective against right-handed pitchers with a different mindset geared toward hitting against all pitchers instead of focusing mostly on batting against lefties.  Alex Campos for Dodgers Digest concurs, discussing about Hernandez’s improved hitting against right-handed picthing this spring.

Drew Graubach at Dodgers Way writes about how Logan Forsythe is ready to “man the hot corner” for the Dodgers in the absence of Justin Turner.  With Turner out for at least the first month of the regular season, Forsythe should get the bulk of the starts at third base.  Forsythe struggled at times last year, battling injury and somewhat inconsistent playing time, but showed versatility in handling both second and third base throughout the course of the season.

Rowan Kavner at Dodgers Insider indicates that lefty starter Rich Hill feels that he is ahead of where he was last year at this time in terms of being ready for the season.  Although Hill’s 7.30 spring ERA leaves something to be desired, it’s worth noting that two years ago, Hill’s spring ERA was over 11 and his regular season ERA was around 2.25.  Manager Dave Roberts indicates that Hill has pitched better than his statistics have indicated.

That’s your roundup for today.  Tune in tonight at 7:10 p.m. to see our Dodgers play the final preseason game before Opening Day at Dodger Stadium.